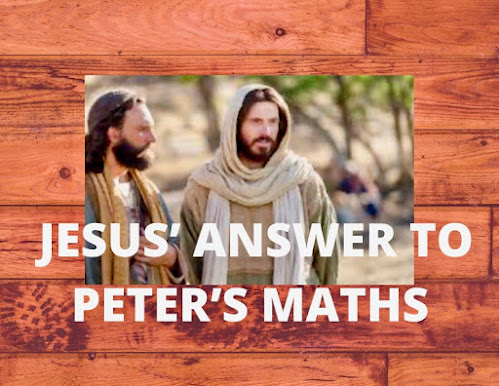 We are at a time when all areas of life are progressing swiftly and speed becomes a mode of human life. People are rushing after the changing circumstances to make life more gratifying. In this process, the value of human-relations is often forgotten. How many lives are left alone when they are unwilling to forgive each other? While some may say that they forgave everything, but not ready to forget the painful experiences of the past and waiting for an opportunity to pay off it. They are leading a wretched life without experiencing the beauty and joy of this God given opportunity. The sad thing is that even the Christians who follow Christ, the embodiment of forgiveness, are not ready to forgive each other over petty things. Though they worship the same God and take part from the same bread and cup are reluctant to forgive one another for simple matters. The unforgiving character spoils the relation between husband and wife, parents and children, and even pastors and believers.

The New Testament has given more importance to forgiveness in Christian life.  The Lord has taught us to pray, "Forgive us our debts, as we also have forgiven our debtors" (Mt. 6:12). It implies that we are the one who decides the criteria of forgiveness of our sins by God. Jesus has given more priority to mutual relation in the ‘Sermon on the Mount’ discourse: “When you bring your gift to the altar and you remember that your brother has something against you, leave your gift there in front of the altar. First go and be reconcile to your brother; then come and offer your gift”(Mat. 5:23-24). In his life Jesus set the best model of forgiveness before those who crucified him, praying, "Father, forgive them, for they do not know what they are doing" (Lk. 23:34).  Lack of love is the key factor of unforgiveness in one’s life.  Apostle Paul says love is patient and keeps no records of wrongs (1Cor.13: ). He reminds us that be kind and compassionate to one another, forgiving each other, just as in Christ God forgave you (Eph. 4:32). In other words, human forgiveness is possible only when we have really experienced God’s forgiveness.

Once Peter asked to Jesus, "Lord, how many times shall I forgive my brother when he sins against me? Up to seven times?” (Mt.18:21). With little proud Peter himself made a suggestion of seven times to reveal the depth of his forgiveness. The rabbis of that time had taught one should forgive up to three times for the deliberate mistakes. Jesus' words that ‘your righteousness should exceed the righteousness of the scribes and Pharisees,’ too might have influenced Peter's proposal. Peter had done his math. Peter took the three, doubled it and added one more. Who could ask more than that? Moreover, seven is a perfect number. Hence, Peter thinks he is being generous and asked "Is it enough?" But Jesus’ reply, ‘not seven times, but seventy-seven times,’ had crossed all boundaries of Peter’s calculation. It also exposes the nothingness of Peter’s proposal. Jesus might have taken a reversed approach to Lamech's vengeance in the Old Testament. Lamech said, "If Cain shall be avenged sevenfold, then Lamech seven and seventyfold times" (Gen.4: 24-NIV). Jesus may have been asking here to overcome Lamech's vengeance with the same degree of patience. Indeed, Jesus is not referring to a number 490 with the expression of seven-seventy times but made it clear that there is no limit to forgiveness. It was a way of saying infinity. Furthermore, Jesus revealed the fact that when we forgive to someone 490 times, it becomes a part of our character and be able to forgive others unconditionally. Jesus was using the numbers to say don't put limits on your forgiveness because God has not put limits on forgiveness and mercy toward you.

Then Jesus shows the importance of unconditional forgiveness through the parable of a king who wanted to settle accounts with his servants (Mt. 18: 23-35). A man who owed the king ten thousand talents was brought to him.  The servant fell on his knees and begged for mercy. The master took pity on him and cancelled the debt. But as he was returning, he found one of his fellow servants who owed him a hundred denarii. He grabbed him and began to choke him without mercy. The fellow servant fell on his knees and begged him for more time to repay. But he refused it and put him in the prison until he could pay the debt. Upon hearing this, the king became angry and handed over the servant to the jailors to be tortured until he should pay back all he owed.

It is shocking when one realizes the difference between the sums of these two servants’ debts. Often the exchange rate of talent varied in ancient times. However, one talent was roughly the equivalent to 15 years’ salary of a common man. So 10,000 talents is equivalent to 1,50000 years of pay. The first servant owed a large number that could never be paid in his lifetime. Yet his master forgave him. But his fellow servant owed only hundred silver coins which is a meager sum. One silver coin was the daily wage of an ordinary servant. If so, then the fellow servant owed only 100 days wages. But 10,000 talents were worth about 100 million pieces of silver. He who received such great forgiveness did not forgive or show mercy to his fellow servant.

To forgive others is not optional.  We forgive as we are forgiven.  If you hold onto anger, hatred, bitterness, whatever, the compassion of God hasn’t changed you, and your debt remains. When we don't forgive others, it brings about a bondage to our souls that could be compared to being enslaved by people or bound by a substance addiction. Often this unforgiveness causes a bitterness that claims us from the inside out. It causes unnecessary stress and mental tension. It locks in sorrow, anger and strife; it locks out joy, love and fellowship. This bitterness is a result of a proud spirit that seeks to keep score and gain revenge for perceived and real wrongs. If we refuse to release our offended feelings, they will eventually control us. We will be in bondage to them as well as in the bondage of sin before God. Jesus pronounces a severe warning here because forgiveness is the cornerstone of our relationship with God, and with others. Forgiveness is the most precious gift God has given to us and we share it with others so that they too will know the joy of having their debt wiped out. Forgiving others’ mistakes is not one's weakness but reveals one’s mature character. As our Father in heaven is merciful, so as we be merciful and forgive others from our heart...

at June 15, 2020
Email ThisBlogThis!Share to TwitterShare to FacebookShare to Pinterest
Labels: JESUS' ANSWER TO PETER'S MATHS